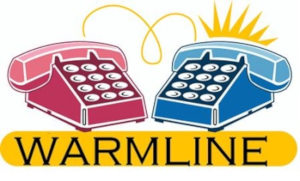 Monthly sponsorship for the Warmline is $35
Call the church office to "reserve" a month for 2018 in memory or honor of a loved one!

Why do we have the Warmline? Today, most of us are so caught up in the rush of life that we forget there is a quiet inner realm of existence - a place where we can gain strength and perspective. Divinity has such a “place.” It is called “The Warmline.” You can call it 24 hours a day at 440-885-4244 and just listen.

What is the Warmline? The Warmline is a recorded daily message to help us cope with life. We don’t always need a “hotline” geared for crisis and traumatic moments. But we all need a "warmline” somewhere to help us get in touch with ourselves, the church, and God. Goethe said, “One should, each day, try to hear a little song, read a good poem, see a fine picture, and if it is possible, speak a few reasonable words.” The Warmline helps us do just that! Each day’s offering includes an opening greeting, a devotional, poem, or scripture reading, Divinity prayer concerns, Divinity birthdays and anniversaries, and a closing prayer.

History of the Warmline. The Warmline began in 1972 by Pastor Roger Prescott at St. Mark’s Lutheran in Fargo, N.D. In 1981, Roger became Director of Volunteer Services of Lutheran Social Services of North Dakota and his Warmline went statewide. I arrived in North Dakota in 1985 and adopted Roger’s Warmline for the parish I was serving. I adopted it again for Nebraska in 1994 and again for Ohio in 2003.

Who records the Warmline? I’m the primary voice when the first thing I do upon arriving each morning at Divinity is choose a devotional and do the recording. Paula records on most Fridays while Loretta and Tricia fill in as needed.

Who listens to the Warmline? The people who sponsor the Warmline each month by paying for the extra telephone line are the biggest listeners and supporters. It has cost $25 a month for many years, but we will have to raise it to $35 in January, 2015. Thanks AT&T!

Older folks with or without computers call often. I’ve been told that when people call in the middle of the night, my voice helps you overcome insomnia. People who want an update on who is in the hospital, who is celebrating a birthday or anniversary, or just want to listen to a devotional - call the Warmline.

Computers were just being introduced in 1985 when I started my first Warmline. Some have suggested that I start a blog. For now, call the Warmline!

Thanks to the many Divinity members who support the Warmline ministry.