God had His eye on the village of Parma Heights. Here were people in need of a church. God opened the eyes of neighboring pastors and concern was voiced for establishing a mission congregation in the growing area.

Under the auspices of the American Lutheran Church, a large Georgian home at 6607 Pearl Road was purchased on April 26 1948. It was used both as a home for the congregation where services were held downstairs and home for the pastor and his family upstairs. The first service was held September 19 1948 and the congregation was officially organized February 27 1949. Charter Membership closed with 73 confirmed members on April 28 1949.

With a vision to the future, the present site was purchased. As the congregation grew steadily, enlarged quarters were needed and they moved to Parma Park School June 7 1953.

Rapid growth was now evident in the community and Divinity grew with it. The congregation became self-supporting in January of 1955 and on July 24 ground was broken for Divinity's first church unit. An additional education wing was added. On September 19 1965 — Divinity's 17th anniversary — the special dedication plaque was consecrated.

With grateful, joyful hearts, Divinity's current sanctuary was dedicated Sunday, November 28 1965. Three arms, symbolizing the Persons of the Trinity, flow into the tower creating a dramatic sight as its 120 feet point to the heavens. 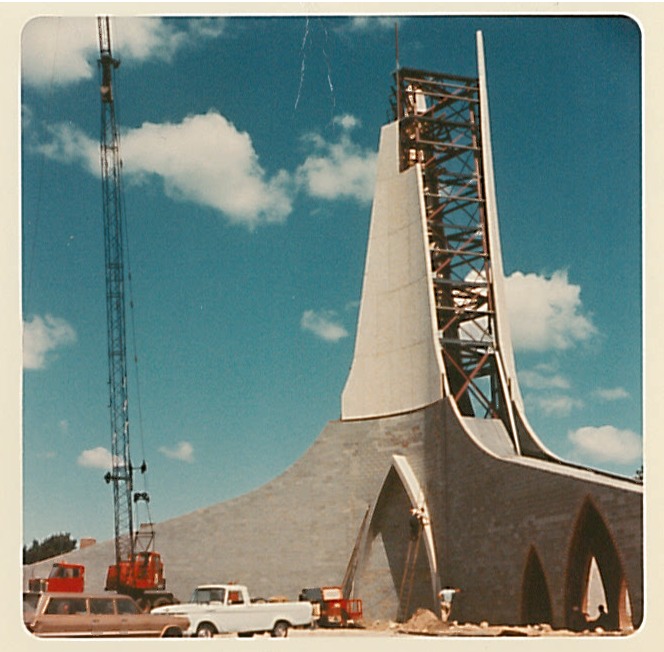 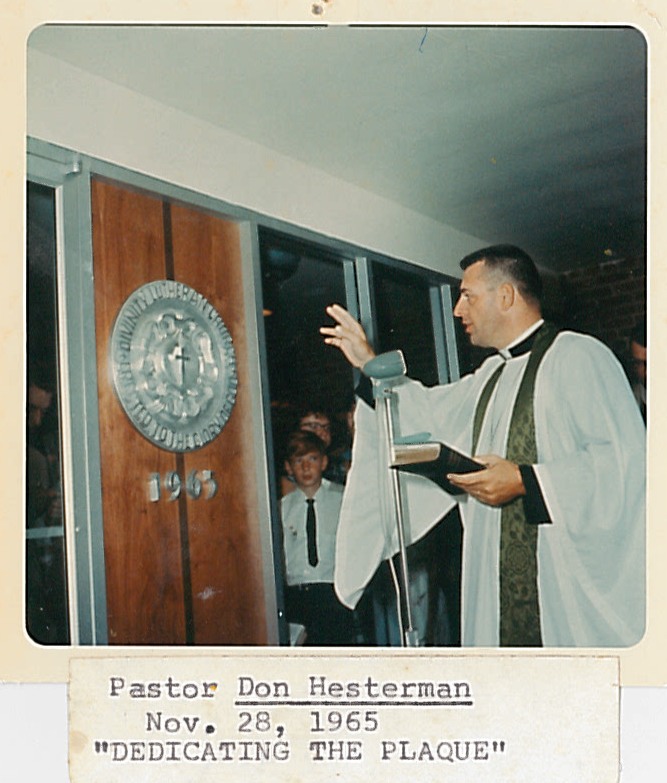 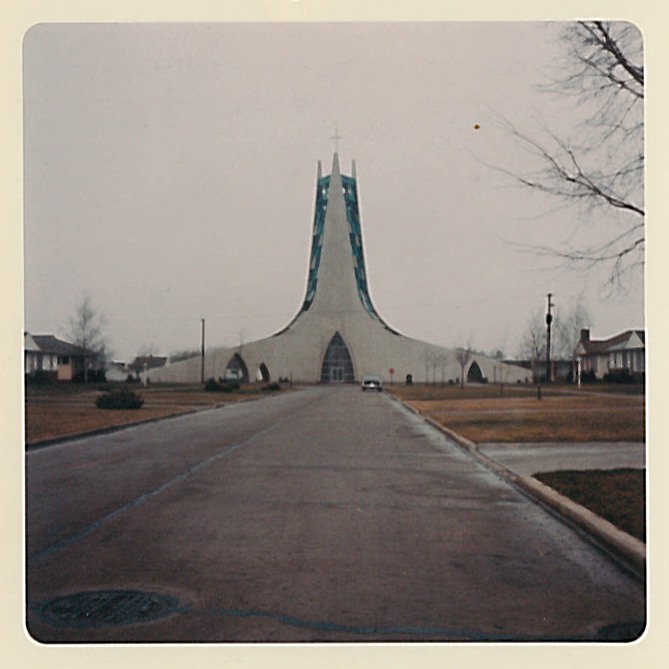 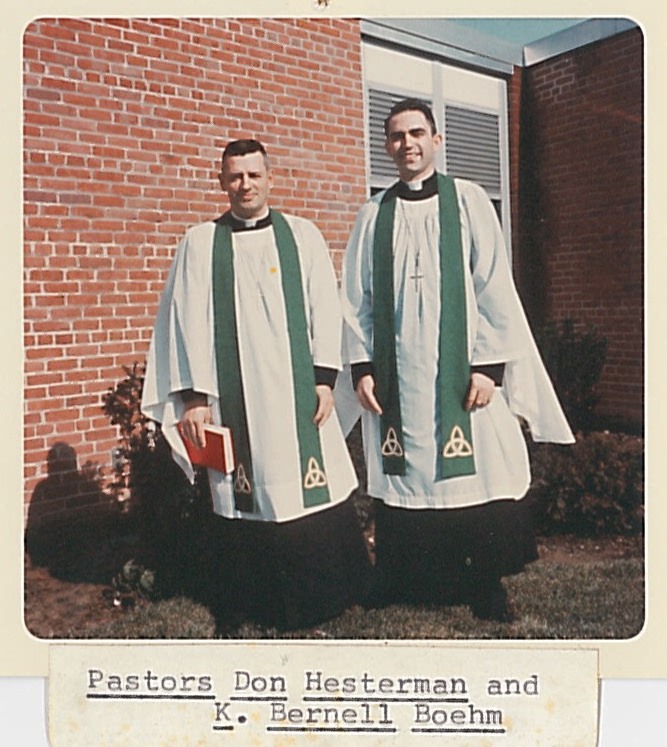 Sculptor Harry Wheeler sought to emphasize both the unity and the mystery of the Trinity with the reredos above the altar. It is our symbol of the Trinity making us aware of the Presence of the Triune God-Father, Son and Holy Spirit-in our midst.

At the top are the wings of a dove symbolizing the Presence of the Holy Spirit pouring out His precious gifts upon us. The dove rests on the head of Christ.

Though without face, the streams of light symbolize Him as the Light of the world. The head is attached to a shape suggesting an infant cradled in an arm further symbolizing the incarnation of Christ, our Savior.

A hand, at the bottom of the reredos symbolizes the Father as our creator and provider. The hand is scarred and striped reminding us the Father gave the Son for crucifixion and our salvation.

A semi-circular design was chosen for the nave to show that we believe the church is God in the midst of His people; worship is open communication between God and His people; and people are not spectators but participants.

The stained glass windows seek to develop a church gathering to worship God and scattering to serve Him, leaving to be the people of God in the world. 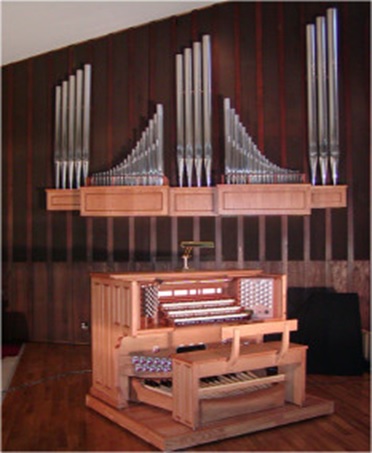 Divinity has had a pipe organ since shortly after the present sanctuary was built. The first instrument was a three manual, 23 rank organ built by the former Hillgreen-Lane Organ Company in 1966. The organ served the congregation well, but over time age caused its components to begin failing. Back in 1980 the combination action failed and was replaced with a new then state of the art combination action. Even with the new action the internal components such as the leather valves and mechanical action began showing the wear and tear of age.

It was in the late 1990’s when the wind chest parts of the various ranks began to fail. It was necessary to form an organ search committee to determine the best road to take, repair or replace. After extensive research, the committee in its report to the congregation recommended replacing the aging Hillgreen-Lane organ. The congregation voted to create an organ fund.

It was in 2003 that the original organ committee was recalled and the search for a new instrument began. After visiting various organs by different builders and getting bids for the replacement it was determined that an organ that would best serve Divinity’s need would be a hybrid instrument. The TS Good Organ Company was awarded the contract to install a three manual RODGERS hybrid instrument. After a two-year period and our prayers, the console of the new organ was installed (June, 2005) with the digital components and speakers.

The new instrument was made up of pipes from the old Hillgreen-Lane organ that were refurbished and revoiced to match the new organ’s digital voicing and the voicing of the façade pipes made and installed by the Fratelli Ruffati Organ company of Italy. The TS Good company oversaw the installation and voicing of the instrument from start to dedication. The completed instrument combined with the digital voices and the pipework has a combined number of ranks totaling 132. The new instrument was dedicated on February 6, 2006 to a full sanctuary. The dedicatory artist was Scott Hanoian. Information on Mr. Hanoian can be found at www.christchurchgp.org.

The organ was the catalyst in the formation of Divinity’s Arts in Action ministry.